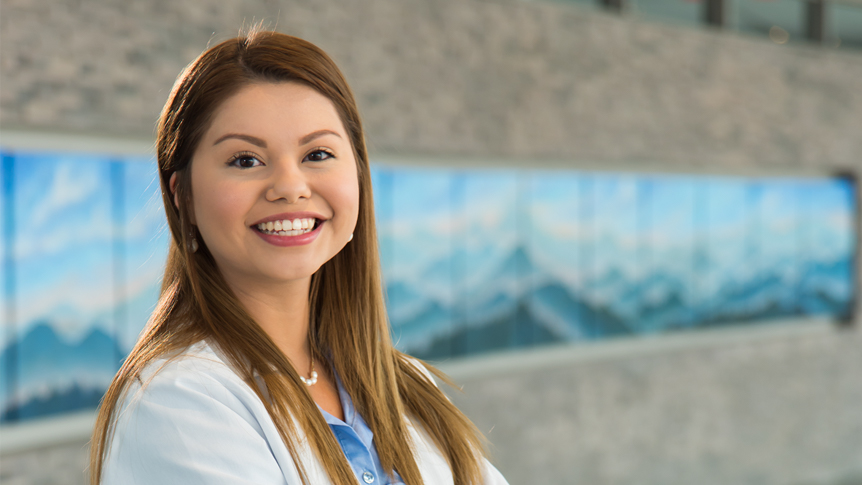 One driving force for this dream was her childhood experiences at clinics with her grandmother. Cesilia would often translate between doctors and her grandmother, who is not fluent in English. At a young age, she witnessed how communication barriers often impeded a patient’s ability to achieve better health outcomes.

Originally from Mexico, Cesilia’s parents did not complete high school. As a first-generation college student, Cesilia will earn a Doctor of Pharmacy degree not only for herself, but for her parents who are living their dreams by seeing Cesilia reach her summit.

Despite her ambitions, Cesilia also knew that neither she nor her parents could afford medical school. During her sophomore year at North Henderson High School, Cesilia reached out to Kirby Farley, career coach at Blue Ridge Community College, to learn more about the Career and College Promise program, which offers tuition-free college classes to high school juniors and seniors that count for both high school and college credits.

While Cesilia was dual enrolled, Blue Ridge Psychology Instructor Deborah DeWitt told her about an expanded pharmacy career pathway for local public high school students that would guarantee an interview with Wingate University’s School of Pharmacy. Cesilia could complete the new Associate in Science Pathway to Wingate University School of Pharmacy degree program on her path to earning a Doctor of Pharmacy in only six years – while saving thousands by initially attending Blue Ridge for two years.

Cesilia is the first student from her high school to enroll in this career-ready academic pathway, and she has inspired her medically-minded peers to attend in the future.

Following her high school graduation, Cesilia also applied for and received a $1,000 IMPACT Scholarship from the Blue Ridge Community College Educational Foundation. “My parents and I are so grateful for this scholarship because it allows me to focus on my academics and pursue my dreams without worrying about paying for college,” she said.

Cesilia hopes to transfer to the Wingate University School of Pharmacy in fall 2021. After earning her Doctor of Pharmacy degree, she is considering a traveling pharmacist career to help overcome the communication barriers between providers and patients, particularly within the Hispanic/Latino community.