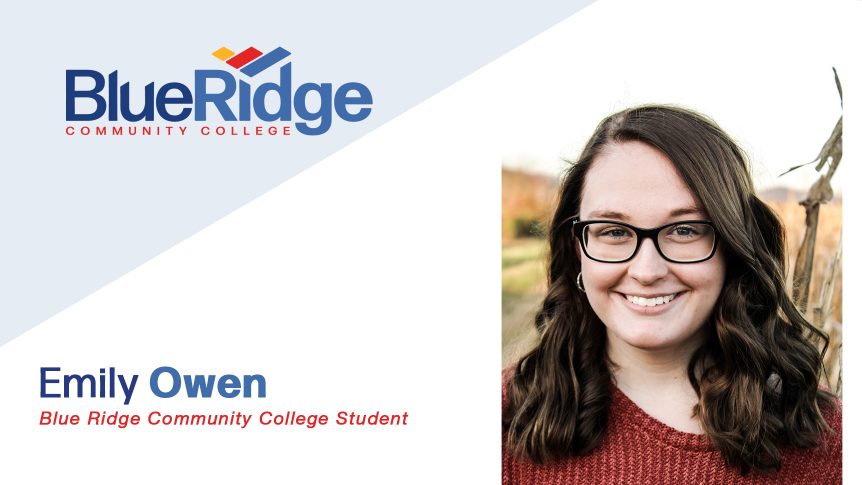 Despite the recent challenges posed by the Covid-19 pandemic, Blue Ridge Community College students continue to persist and succeed. The College has remained open and has implemented innovative ways to keep students on track toward graduation.

Many people are aware that Blue Ridge offers low tuition cost and ease of transferability to all North Carolina public universities and a number of private colleges and universities. However, that is not what initially attracted Owen.

College was certainly always in Owen’s plan. She knew that she’d need higher education due to her interest in healthcare fields. Owen explains, “Ever since I was a sophomore in high school, I have known that I wanted to go into the healthcare field when I was older.” Initially, Owen was interested in “becoming a Nurse, and then one day I was flipping through a book of health care careers a former teacher had given me and came across a Physical Therapist. I was 19 at this time and drawn to that career immediately.”

Owen’s interest in physical therapy was also influenced by her sister. “My sister was a big basketball player growing up, and I was there to watch her every game. Over her career she had 5 major knee surgeries and was in Physical Therapy a lot. Seeing her go through it gave me an interest deep down.”

Interestingly, Blue Ridge was not originally part of Owen’s plan. Like many high school seniors, Owen envisioned herself heading straight into a four year university. To her disappointment she found that “I was rejected from every four year university I applied to, including the two I have been accepted into so far.” These rejections were due to certain health factors that negatively impacted her grades and standardized test scores in her junior and senior years. “After coming to terms that I would not be able to get into a four year college straight out of high school, I decided on Guilford Technical Community College since I was eager to explore new cities.” This plan was also interrupted by continued health-related setbacks, thus Owen came to enroll in Blue Ridge.

As is often the case, however, such disappointments often mask blessings. At Blue Ridge, Owen has found great success, working her way through many challenging courses including pre-calculus algebra and trigonometry, and anatomy and physiology. Reflecting on her experience, Owen states, “Blue Ridge has been an amazing first step towards becoming a Physical Therapist. When I first started in August 2018, I was upset to not be where I wanted, but I didn’t know how much I would achieve and the resources that were available to me.”

Owen put in a great deal of hard work to attain her Associate in Science degree, the first step toward her educational and career goal. She rightfully takes pride in her accomplishments, but doesn’t forget the support she had along the way. “I was guided by amazing professors and academic advisors who made sure I got the best education possible and led me to apply to the right schools for my career choice and the best possible classes. They were always available for extra help or a meeting if necessary and helped me mature professionally. Blue Ridge gave me a second chance at my dreams to take control of my future and have a chance at the career I want.”

After graduating in May, Owen plans to transfer to a university to continue her path toward becoming a physical therapist. She has already been accepted to UNC Greensboro and UNC Charlotte, and she awaits a decision from UNC Chapel Hill.

Owen looks forward to a career as a physical therapist. She explains that “I want to be a Physical Therapist because I enjoy helping others and want to help them recover from major surgeries, injuries, and other health impairments.” More specifically Owen notes, “I would like to work with athletes who have suffered injuries as that is what interested me in the career field to begin with.”

Blue Ridge is excited to celebrate Owen’s accomplishment and those of the many others like her who have gotten a strong start or reached their academic and career goals through the College. Blue Ridge remains committed to its vision: “Transforming lives through the power of learning.”

It’s never too late to reach for your dreams and take hold of your future. Registration for the summer and fall semesters opens to new students on Mar. 15. Contact the Blue Ridge Transylvania County Campus at 828-883-2520 for more information.